Once again, I am posting far behind schedule. This post describes the last major trip my daughter and I took during her summer break in 2017. Now she’s enjoying her 2018 winter break, and we’re trying to decide where to go for the two weeks before we head to her grandparents’ in Hunan for Chinese New Year. But perhaps a post like this at the height of winter is appropriate; after all, deep in February, it’s nice to call to memory those days of August that made us cheerful (bonus points if you know the reference!).

I have to confess the trip to Kangding 康定 was mostly my idea. I let her make the call on going to Xishuangbanna 西双版纳 even though I knew summer wasn’t the best time of year to be there, so I figured I was within my rights to pick the next trip. Kangding is the gateway to western Sichuan, which is still sometimes called Kham ཁམས་. It is the Tibetan region of Sichuan, and has long been a cultural borderland where Tibetan and Chinese cultures meet and interact. If you have read some of my earlier posts about this region, you know how much I adore it.

I wanted to get back to the big mountains at least once during the summer. They’re special to me. They rejuvenate me in a way that few other places can. I also wanted to introduce my daughter to them. This was her first experience at high altitude, and I wanted it to be a good one. I wished I could relocate there for a month or so to write–like you read about writers doing in the early twentieth century–but I knew it was impossible. At the least, however, my daughter and I could spend eight or nine days enjoying their beauty.

When traveling in the mountains the trip is at least half the pleasure. Every bend in the road reveals a new vista; the top of every rise, a new landscape.

When I first made the trip to Kangding, back in 1996, it took anywhere from twenty-four to thirty-six hours–depending on just how bad the roads were at the time. Now it’s been reduced to a very modest eight-hour trip and will be even faster when they finish an expressway that’s under construction. It’s hard to argue with better roads–they do bring a lot of benefits to people living along them–but it’s also hard to deny that I sometimes miss the long winding, unpredictable route from twenty years ago. You never knew what you’d see, and always saw quite a lot.

We arrived in Kangding in the late afternoon. The main part of the town sits at about 2500m/8400ft. I’ve never had problems with the altitude there, and I’ve always said it was about the highest you could go without really feeling it. Like all mountain towns, however, Kangding has a strong vertical dimension. My previous visits had been confined to the relatively level valley floor. This time we were staying in a guesthouse two hundred meters (650 feet) above it. The first climb up to it, dragging our rather heavy bag behind me, was … challenging.

I was rewarded for my efforts, however, by views of Kangding that were new to me, particularly at night.

Twenty years ago, Kangding was largely confined to a kilometer or so stretch of road between the confluences of the two rivers and a bridge up the larger river. There wasn’t much to see at night apart from the darkness. That’s a sight that’s getting harder and harder to see these days.

The next morning we attempted to hike up to a meadow behind our guesthouse. The instructions on how to get there–clearly written by someone who’d been there long enough to get used to five hundred meter climbs at altitude–greatly exaggerated the ease and length of the climb. Five hours later, it was pretty obvious we were still nowhere close to our destination, so we had to turn back. But the views, the beautiful weather, and our discovery of a magical feather, more than made up for the effort we spent. 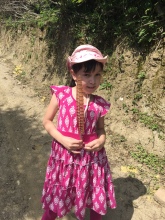 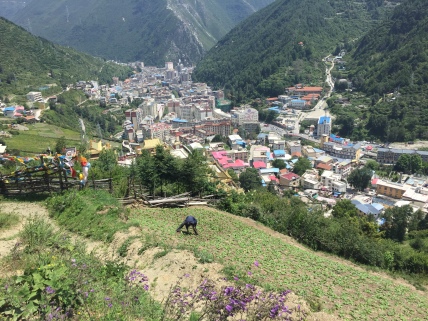 As well as getting much bigger, Kangding has also gotten much fancier over the last twenty years. It’s hard to argue against the ready availability of hot showers, and the presence of a restaurant serving really good pizzas clearly impressed my daughter. The fact that the same restaurant also makes a mean iced latte wasn’t lost on me.

I also ended up meeting a very interesting Tibetan monk there. He was drinking coffee and translating Rabindranath Tagore’s poetry into Chinese. As far as I’m concerned anyone who translates Tagore poetry is worth knowing–particularly if they also like coffee. He spoke to me because he needed help with one phrase in the poem he was working on, and we ended up sitting together and talking a while. He actually lives in another town a little north of Kangding, and I hope to visit him again sometime.

Paoma Mountain (Paoma shan 跑马山, literally, “Running Horse Mountain”) is the major mountain right behind the center of Kangding. It’s the one covered in little lights in the picture above. We ended up going up Paoma Mountain twice–I think the pony rides may have had something to do with that. It’s a park, but it really is quite beautiful. You feel a world away from the city below, even when you’re looking down at it. 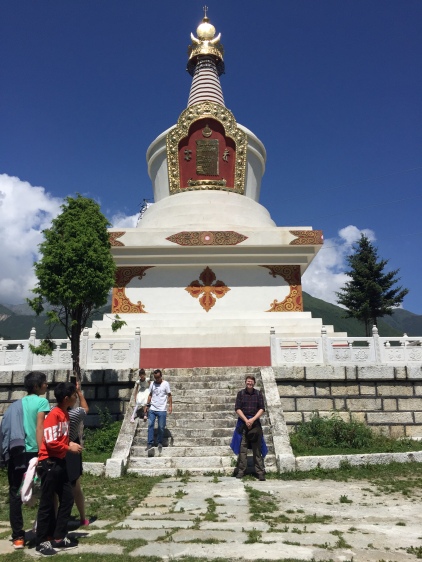 The “high-point” of our trip–altitude-wise at least–was our trip up to a mountain pass called Yajia geng. Lying about 4000m/13,300ft above sea level, it was the highest we went.  The weather didn’t cooperate–spring and fall are better for views than summer–so we couldn’t see a lot, but there’s a small lake there and they whole place has that atmosphere peculiar to very high places. We also discovered what must be the world’s most abandoned car, and got to have a snack at our drivers house. 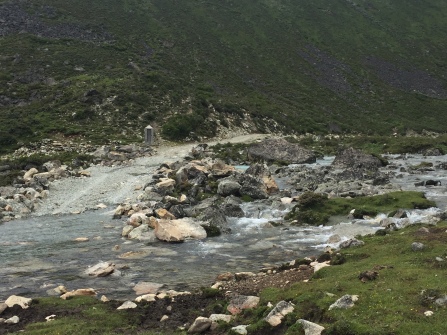 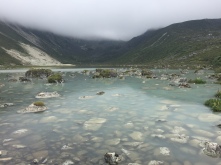 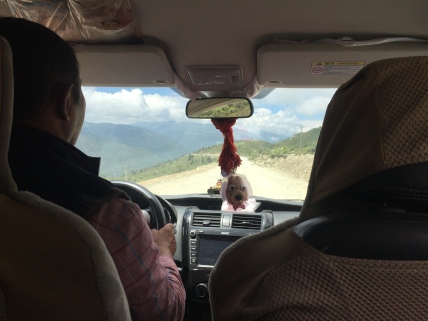 Kangding has no shortage of temples, and we saw quite a few. I’ve seen more than my fair share of Tibetan monasteries and temples, but I confess that I still find them beautiful. 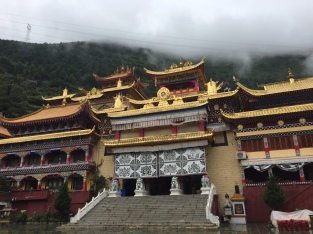 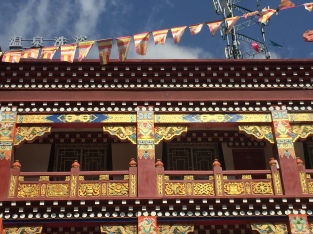 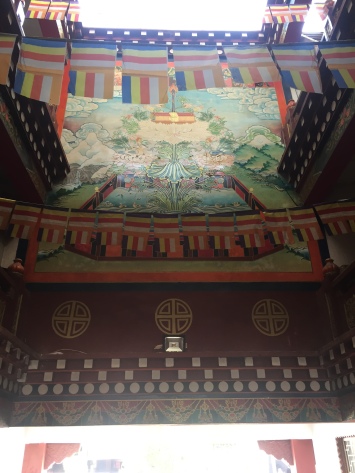 Considering the season, we were pretty lucky weather-wise. It rained a little, but most days were sunny. Our last evening in Kangding was particularly beautiful, and as we walked along the hillside where our guesthouse was located, I was still noticing places we hadn’t been that I wished I had time to visit. It was a good trip, and my daughter did wonderfully. Maybe this coming summer she’ll be ready for an even higher adventure! 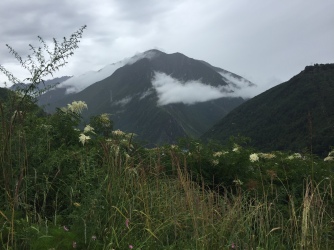 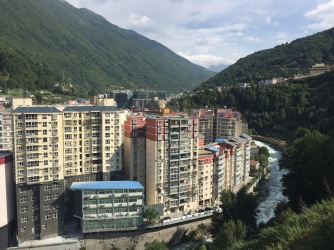 Kangding has the distinction of being the subject of a much-loved Chinese folksong, “Kangding Love Song (Kangding qingge 康定情歌),” which briefly tells the love story of a young couple in Kangding. The repeated syllables “liuliu 溜溜” although primarily there for their sound–a practice that goes back to the beginnings of Chinese poetry–also convey the idea of flowing water and of continuity, very appropriate given that flowing water is such a central aspect of experience in Kangding.

One thought on “Kangding by Summer Light”