The river’s roar is the subtle backdrop to everything in Kangding 康定. Five hundred—even a thousand—feet up the hillside it’s still there, echoing endlessly between the valley’s mountain walls. It’s hard to deny that the Tibetan name suits the town better: Dartsedo དར་རྩེ་མདོ་—literally, the meeting of the Dar and Tse rivers. The rivers define the town. They’re its ever-present core, its veins and arteries, fed by countless capillaries rolling off the mountains. The mountains define where the town isn’t, where it ends, because you simply can’t build a town on a eighty degree slope.

But the mountains feel like more than simply a border. They hover over the town like benevolent giants, dictating the course of the river and revealing the shape of the valley from any vantage point not obscured by trees. Mountains are often seen as gods in Tibetan beliefs, and when you’re here it’s easy to see why. The mountains have a presence, but it’s not a human presence. You feel them near you as something majestic, but alien. If you walk among them at all, you do so on their terms.

In the mornings and the evenings clouds gather around their peaks or even drift down to hug their waists. If the weather is sunny, the clouds slowly melt away or drift high up into the fabulously blue sky. If the weather is wet, the spill off the peaks and down the slopes, blanketing the town in gray and unleashing a sullen drizzle that can last for days. 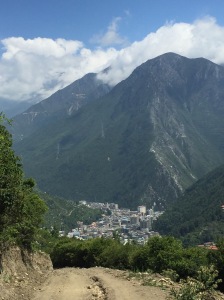 These are real mountains, not oversized hills. Even though Kangding is already fairly high up, sitting at about 2400m/7800ft, they think nothing of adding another 2000-4000m/6500-13,000ft to that. Their size is deceptive. Human eyes—or at least the eyes of lowlanders—aren’t used to looking at things on so large a scale. Distances that appear short prove long and climbs that appear easy prove exhausting—thought the thin air undoubtedly has something to do with the last one. Most of all, the openness of the view distorts the size of the mountains themselves. A glance takes in ten peaks, and only when you stand on one of them do you realize how vast and weighty it is compared to your own tiny, featherweight self.