It’s been almost five months since my last post. This one actually takes me back to the beginning of August last year. I’ve been extremely busy and happy, and still am, but I’ve realized that working on this blog causes me to approach my life here in a different, and more productive, way. For that reason if nothing else, I want to try and get this going again. Mind you, I’ve got so much old material to post, it may take a while to get caught up. 🙂 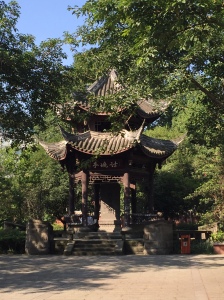 So these recordings come from a morning I spent walking home from my daughters school–the long way. I passed through several parks on the way. It was a lovely, cool summer morning, and I had a great time seeing what there was to be seen. I also found a number of people performing music. This isn’t unusual in China. Older people in particular often gather to play music or sing in parks in the morning. Some of the choirs that meet every morning are extremely large–and loud! These performers were on a smaller scale, however. The first was a single man playing the erhu 二胡–a vaguely fiddle-like two-stringed instrument played with a bow. I thought he played rather nicely, and the environment–a small park sandwiched on a sliver of land between two small rivers–was perfect. The second was a group with several instruments and singers, tucked away in a corner of a park in a pavilion surrounded by trees. One of the differences between this sort of park-music and the street-music of cities in the U.S. is that no one is trying to make money. They perform for their own pleasure, and you’re always free to stop and listen.