When you live abroad, receiving a package from home can be a huge deal. This was especially true nineteen years ago when they were almost the only way to get things like good chocolate, cheese, English books (other than the classics), etc., but even now there’s something nice about getting things from the other side of the world. 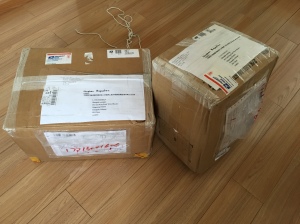 We’ve only been here a few weeks, so we don’t exactly have any unsatisfiable cravings yet, but these packages were important nonetheless. Inevitably, our bags were simply too full when we prepared to leave the U.S. Something had to go. In the end it was a small stack of my more precious books, a stash of powdered herbal medicines for dealing with the consequences of dampness and heat on truly remarkable scales, and a handful of gifts for my daughter that were meant to be brought out triumphantly upon our arrival.

So with much regret and muttered cursing, I left all those treasures in a pile to be dealt with by my long-suffering parents–among whose many virtues is a fondness for sending parcels–with a silent vow not to look at the cost of the postage when the packages arrived (one man can only endure so much mortification).

Fast forward two weeks and we have arrived in Chengdu and so, apparently, have two of the packages, but they’re nowhere to be seen. The USPS reports that delivery was attempted but we weren’t home, which is quite possible, but I have no faith in the USPS’s knowledge of what is happening on the ground in China. My general experience has been that they get things to China, toss it in a bin somewhere, say a prayer, mark the package “delivered,” and go their merry way. So I didn’t worry, but when nearly a week had passed, I began to wonder.

I went to check the logical places: the local post office and our apartment complex’s service center. The young woman in the service center assured me they would have called me if a parcel had arrived for me.

“But there’s no phone number on this parcel.” I informed her.

With a look of mingled pity and incredulity she replied, “What? But if there’s no phone number on it, how did they expect you to get the package?”

Now this is a wonderful moment from two perspectives. The first is cultural. Her puzzlement was absolutely genuine. It was truly inconceivable to her that anyone would be stupid enough to send a parcel without writing the recipient’s cell phone number on it, and it was equally incredible to me that anyone would think to do so. It was a lovely, if insignificant, moment of clashing cultural expectations. The second was historical. Unlike my young friend, I am old enough to remember when almost no one in China had a cell phone (pagers were all the rage in 1996) and many people (myself included) didn’t even have a phone of any sort in their apartment. Phones were part of the street-side market that supplied so many basic needs back then, and I’ve made many an international call while watching passerby purchase vegetables or get their shoes repaired. Under those circumstances, phone numbers were obviously not going to be on anyone’s parcels.

At any rate, one morning of online searching revealed that contrary to all precedent, my distrust in the USPS  was misplaced. The Chinese postal service also claimed the packages had arrived. Further searching even revealed a phone number to enquire about their location. Two conversations and three phone calls later, I had actually reached the local post office’s package office and found a helpful postal worker who was relieved to have a solution to the baffling parcels without a phone number that had been sitting in her office for almost a week. With admirable efficiency, she sent them out for delivery, and they arrived a few hours later.