In the spring of 1996, April 9 to be exact, I arrived in China for the first time. My flight had gone from Atlanta, to Chicago, to Seattle, to Beijing, to Chengdu. It was my first time traveling further from the U.S. than Mexico, and I was excited. The flight was undersold and there was lots of space to stretch out in, so I had a window seat and the two seats next to it all to myself. I remember looking out the window as we flew in a perpetual pre-dawn glow for hours on end before we approached Beijing as the morning finally caught up with us.

On arriving in Chengdu I was met by an old friend who was teaching at the same school I would be teaching at: Southwest Jiaotong University (Xinan jiaotong daxue 西南交通大学). The school had also sent a driver and assistant (of some sort) to pick me up, but since neither of them spoke English, and my friend spoke less Chinese than myself, conversation was fairly limited. It was the beginning of one of the most turbulent and wonderful periods of my life–and the action was all centered on SW Jiaotong University and Chengdu.

Nineteen years later, I have just returned to Chengdu with the intention of settling here for a nice long time. I’ve been to Chengdu a number of times since 1996. From 1999-2000 I was a student at Sichuan University (Sichuan daxue 四川大学), and I’ve visited with my wife and daughter in 2010 and 2014. I thought the ghosts of the past were reasonably exorcised, but after we arrived it became clear that the past was going to be a constant companion on this trip. I have too many memories of Chengdu, and being here has stirred them all up and brought them back to life.

I was, for that reason, a little hesitant to make the pilgrimage back to Jiaoda (as SW Jiaotong University is known locally). I don’t want to let the past overwhelm the present. I’m sure that the success of my move back to Chengdu depends on my establishing a relationship with Chengdu as it is now, and I’ve worried that my fondness for Chengdu as it was then might interfere. But I’ve never been able to resist a good visit anywhere interesting, so I got on my bike one morning and pedaled off to see my old haunts.

SW Jiaotong University is located on the northwest side of the 2nd Ring Road. Nineteen years ago, this was the edge of town. If you kept going past the school, you literally found yourself in farmland. Nowadays the 2nd Ring Road marks the edge of the city center. There are three more ring roads beyond it. They actually completed the 3rd Ring Road during my stay at Jiaoda, but since the whole road ran through farms, we all thought it was rather a good joke. Two decades later, we’re the one’s who look foolish :-).

I entered through the West Gate. This was, and looks like it still is, the gate that most people come and go through in their daily business. The road outside the West gate used to be a dusty, slightly too wide, lane with no trees, a bus depot, a handful of shops, and a vegetable market whose vendors continued to stare at me even after a year and a half. Nowadays it’s a much wider, still too sunny, very busy boulevard. The West Gate itself is now a shining vision that bears no comparison with its former homely self.

Having passed through the gate, there was no doubt in my mind. The first place I wanted to visit was my old apartment. Getting to my old apartment requires passing by the campus lake. The West Gate has changed considerably, but in rather ordinary and expected ways. The lake, however, has undergone a truly remarkable transformation.

When I first arrived at Jiaoda, the lake wasn’t a lake at all. It had been drained and resembled nothing so much as a hole in the ground containing numerous puddles. On nice days, that didn’t stop people from sitting beside it–the hole in ground–and chatting, but it was somewhat peculiar experience. They filled the lake with water shortly after I arrived, but even then it was not exactly scenic. Some other foreign teachers once observed a whole dead pig float into the lake. I suppose that at least proved there was some water flow. The lake today is filled with lotus flowers and extremely attractive. To be honest it was hardly recognizable. 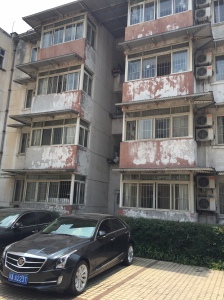 I road along the lake to my old apartment. This was a somewhat different experience. These apartments never looked fabulous, but I seriously think they haven’t been repainted in the nineteen years I’ve been gone. I lived in the top left apartment for six months, until I managed to score an apartment with a view of the lake.

To be honest, these apartments were never much to write home about. There were problems with mosquitoes and rats (I eventually sealed the kitchen door and ceded that room to the rats in perpetuity). The beds and furniture were not particularly comfortable (though to be fair the bed was a step above the plywood-and-blanket mattresses the students got in the dorms), and there was no central heating (I’m still amazed I didn’t burn the building down with my space heater). In spite of all of that, they grew on me in a way that few apartments have before or since. For a few months after I returned to the U.S. I would wake up thinking I was in this apartment and expecting the doors and windows to be in the same place. Full awakening to my real location was never a pleasant experience.

I think it was the people I met in that trip and the experiences I had–sometimes with them, sometimes on my own–that made the time I spent at Jiaoda so special to me. For years I could remember the details of that journey with astonishing clarity. Even now, although the years have caused many memories to fade, revisiting places I knew brings memories floating back to the surface with a vividness that always surprises me. This trip to Jiaoda awoke a lot of memories of strangely small events, things you’d never remember normally, but that suddenly came back to me as I passed by a building or a path I hadn’t seen in almost two decades. 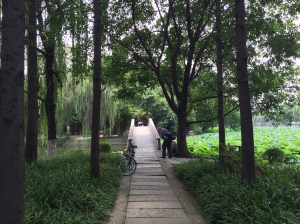 This is the path I to the teaching buildings I walked every day I had classes. It leads to the only bridge over the lake and was always reasonably pretty. But the trees that now provide such attractive shade to the path were only saplings back then. Most of them were barely taller than me. I’ve gotten used to the fact that people I remember as children are already adults, but trees? Et tu natura?

This was one of the strangest memories the resurfaced. As I was bicycling past this building I suddenly remembered that the man who used to cut my hair worked in the room that looks out the second window from the left. The building was rather run-down back then, and a haircut cost 2 RMB (about $0.25). He was an amazing–if somewhat frightening–barber. He cut you hair with a rapid circular motion of his arm like a windmill: clip-clip-clip, swing, clip-clip-clip. It always seemed like he was in imminent danger of cutting of my ear, but it was a great haircut for a quarter! 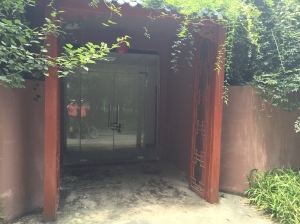 This is the entrance to the bicycle shed. Bicycle theft was, maybe still is (I’ll find out soon enough), a major problem in Chinese cities, so to keep your bicycle safe, you park it in a shed or other place where someone–usually an older woman–is watching it. The old woman watching this shed was particularly lacking in conversation skills–all the more when confronted with ignorant 老外 (laowai “foreigners”) who didn’t know how the simplest of things right. She whistled, clapped, and grunted at us even when we tried to speak Chinese. None of which excuses my unintentional slandering of her good name, however. One day while passing the shed I smelled the unmistakable stench of marijuana. I had just graduated from college, so it was a smell I felt confident I could identify. I told the other foreign teachers who found it equally hard to believe and equally hard to deny after they had smelled it too. At the time none of us had any experience with moxibustion–the burning of mugwort wool to produce heat over acupuncture points. Far from being a pot-head, the bicycle lady was most likely rheumatic.

This nondescript piece of pavement, located in front of the (also new at the time) gym, was where I first began studying Taiji (better known as Tai-chi). I met pre-dawn with a group of undergrads and a graduate student from Chen Village–the birthplace of Taiji. In hindsight he wasn’t much of a teacher, but I enjoyed myself and it got me into the internal martial arts, which have become a lifelong love. It was also here that I saw my one and only solar eclipse. It wasn’t total, but it was close. I was practicing one morning–alone, for some reason no one else showed up that day–and suddenly looked up to see the shadow of the moon passing over the disc of the sun. I had no idea there was going to be an eclipse that morning. I was totally cut off from Western media–there was no internet back then–and my Chinese wasn’t good enough to use Chinese media. The sun was so low on the horizon that you could watch the eclipse with the naked eye. It was over quickly, but it was somehow deeply satisfying the stand there alone watching it. 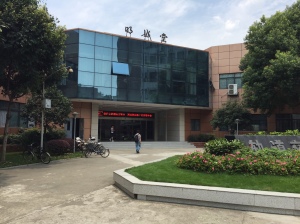 And last but not least, the theater where two of my foreign teacher colleagues, with the help of a third who is a good artist, put on a truly remarkable all-student performance of South Pacific–in English. The students had their lines and songs down perfectly. You would be hard pressed to get such a good performance from native English speaking college students. Unfortunately, they spoke their English so well that I think I and a foreign student were the only people in the theater who completely understood. The rest of the audience sat in polite stupefaction for the whole performance and applauded politely but with no real gusto at the end. I always felt bad for the performers and my friends who put the whole thing together, but I suppose the poet got it right: “Full many a flow’r is born to blush unseen,/And waste its sweetness on the desert air.” Sometimes it just can’t be helped.

Astute observers will have noticed that I haven’t mentioned my teaching in this post. Unfortunately, my teaching was not particularly memorable to me–and presumably not to my students either. That’s no reflection on the students themselves, many of whom were both bright and kind. I was hoping I might bump into one of them while bicycling around campus. It’s not uncommon for students to be hired by their own university in China, but no such luck. Still, it was intriguing to go back. In some ways I guess this must be how some people feel about college or high-school class reunions, but to me this is much more meaningful.